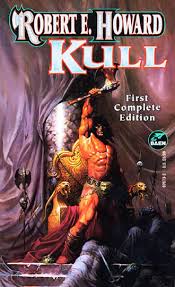 Some years back I decided that if I was serious about writing fantasy I’d best understand the roots of the genre, and I threw myself into reading work by its founding fathers and mothers. I came away with a deep appreciation of a number of authors I’d never explored in much detail before (Robert E. Howard, Lord Dunsany, Clark Asthon Smith, Poul Anderson, C.L. Moore, and others) and a better understanding of the kind of fantasy I most enjoyed. Some call it heroic fiction, and others have tried other labels, but the one that seems to have stuck the most is sword-and-sorcery, a term coined by Fritz Leiber. While I think I know it when I see it, a lot of different people have attempted to define it. Back when I helmed the Flashing Swords e-zine I had to tell the readers exactly what kind of fiction I most wanted to print, and so I set out to describe what I thought sword-and-sorcery was all about. That’s been a few years ago, and the definitions have since been improved upon with some suggestions from John Hocking, William King, Robert Rhodes, and John “The Gneech” Robey.

The protagonists in sword-and-sorcery fiction are most often thieves, mercenaries, or barbarians struggling not for worlds or kingdoms, but for their own gain or mere survival. They are rebels against authority, skeptical of civilization and its rulers and adherents. While the strengths and skills of sword-and-sorcery heroes are romanticized, their exploits take place on a very different stage from one where lovely princesses, dashing nobles, and prophesied saviors are cast as the leads. Sword-and-sorcery heroes face more immediate problems than those of questing kings. They are cousins of the lone gunslingers of American westerns and the wandering samurai of Japanese folklore, traveling through the wilderness to right wrongs or simply to earn food, shelter, and coin. Unknown or hazardous lands are an essential ingredient of the genre, and if its protagonists should chance upon inhabited lands, they are often strangers to either the culture or civilization itself.

Sword-and-sorcery distances itself further from high or epic fantasy by adopting a gritty, realistic tone that creates an intense, often grim, sense of realism seemingly at odds with a fantasy setting.  This vein of hardboiled realism casts the genre’s fantastic elements in an entirely new light, while rendering characters and conflict in a much more immediate fashion.  Sword-and-sorcery at times veers into dark, fatalistic territory reminiscent of the grimmer examples of noir-crime fiction.  This takes the fantasy genre, the most popular examples of which might be characterized as bucolic fairy tales with pre-ordained happy endings, and transposes a bleak, essentially urban style upon it with often startling effect.

While sword-and-sorcery is a relative to high fantasy, it is a different animal. High fantasy, mostly invented by William Morris as an echo of Sir Thomas Mallory and then popularized by J.R.R. Tolkien, moves for the most part at a slow, stately, pace, meandering gently from plot point to plot point, or, as is often the case, from location to location. Movie critic Roger Ebert has some astute observations on The Lord of the Rings, which I will quote here.

“The trilogy is mostly about leaving places, going places, being places, and going on to other places, all amid fearful portents and speculations. There are a great many mountains, valleys, streams, villages, caves, residences, grottos, bowers, fields, high roads, low roads, and along them the Hobbits and their larger companions travel while paying great attention to mealtimes. Landscapes are described with the faithful detail of a Victorian travel writer. … mostly the trilogy is an unfolding, a quest, a journey, told in an elevated, archaic, romantic prose style that tests our capacity for the declarative voice.”

While exotic landscape is present, even common, in sword-and-sorcery, it is displayed differently and toward a different effect.  Sword-and-sorcery was birthed in an entirely different tradition. Robert E. Howard, its creator, wrote for the pulps. The pulp magazines, the television of their day, were fueled by quick moving action. The stories needed to grab you within the first few sentences so that if you were browsing the magazine at the news stand you’d feel compelled to purchase it to finish. The pulp stories were meant to seize your attention from the opening lines and never let go.

This difference in pacing is crucial  and there are hidden difficulties attendant in trying to create it on the page.  My friend, the mighty John Chris Hocking, added this to the discussion: “Some sword-and-sorcery authors seem to believe that swift pacing must equal Action.  And that Action must equal Violence.  Neither of these things are true.  All the fighting and running and frenzy you create will grow tiresome unless it is moving the story forward.  Sure, Action is great unto itself, but it is the unfolding of the plot that truly captivates.”

The best way to acquaint oneself with this style of pacing is to READ  the writers who did it. Certainly this is a far from exhaustive list, but this is a good start to the process. Read for enjoyment (if you’re not reading for enjoyment you probably shouldn’t bother trying to write in the style) but read critically as well. There are other fabulous works and fabulous authors, but this small selection cited here gives you a basic primer on sword-and-sorcery focusing mostly on shorter stories, short novels, and novellas. It is meant as an immersive introduction that will not take two or three years of study. Once you have the material in hand it would not take long to familiarize yourself with it.

Robert E. Howard: There’s a recent set of Howard books from Del Rey that collect all the Conan tales. Find a copy of The Coming of Conan and dip into the collection. At the least, read “Tower of the Elephant,” “Queen of the Black Coast,” and “Rogues in the House.”

Fritz Leiber: Leiber’s famed Lankhmar stories have been reprinted so many times that it’s hard to suggest any particular volume because the contents vary. Instead here are specific stories. Read three or four of any of these: “Thieves’ House,” “The Jewels in the Forest,” “The Sunken Land,” “The Howling Tower,” “The Seven Black Priests,” “When the Sea-King’s Away,” “Bazaar of the Bizarre,” “Lean Times in Lankhmar,” “The Lords of Quarmall.”

Jack Vance: The Dying Earth – sword-and-sorcery, science fiction, planetary romance—whatever it is exactly that Vance wrote when he bent so many genres (long before that was in vogue) he wrote it well, with amazing world building and vivid imagination. Don’t feel compelled to read the entire series, just the first short little novel.

What to look for when you’re reading?

One thing you should note is that none of these authors worked from templates. The character classes as typified by role-playing games like Dungeons and Dragons were designed based on the works of these authors so that players might create characters like those from their favorite fantasy stories. Now many of those templates and settings have become rigid and unchanging. Castle, wizard with spell book, dragon, orc, halfing, thieves’ guild (from Leiber), chaos, law (from Moorcock). Too many of us have forgotten the source material. Those templates need to be set aside. If you’re writing for a game company by all means use elves, hobbits, ogres and the like, but otherwise leave them in their castles and invent something of your own. If you do want to write of elves or ogres, then you’ll need to do something unique with them.