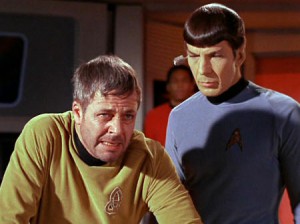 So here’s a cool thing. If you’re a musician, or music scholar, and happen also to be a fan of the original Star Trek, boy, do I have a link for you.

I’ve long said that the original Star Trek had some of the finest, most memorable music for any television series, ever. I’ve sometimes wondered if it’s so hummable just because I’m used to it, having seen the shows so many times, but I don’t think that’s the real story. There truly was gripping background music tracked through the first two seasons, and among the finest was the music originally composed for my favorite episode, “The Doomsday Machine,” and used in numerous episodes thereafter.

Here’s a link to a great video by musician Shem von Shroeck. For the first nine minutes he dissects the musical cues and leitmotifs from composer Sol Kaplan’s score for “The Doomsday Machine.” If you really want to go deeper into the weeds, following on that is a version of the actual episode with musical commentary, so you can hear even more clearly all the clever stuff Kaplan was doing.

It’s a pretty nifty analysis, and if any of this sounds of remote interest, you really ought to take a look. Or, rather, listen.