When the Moment Passes 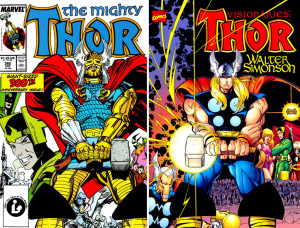 got to thinking about the Simonson run on Thor yesterday, as regular visitors probably noticed.

I missed the whole Simonson Thor run when it was on-going, discovering it about five years after it was over when my friend Bruce and I traded favorite comics series. That was, of course, long before the days of Thor: Visionaries and other graphic novel collections, AND I was a poor college student, so I had my hands full trying to track down copies of all those issues (as well as the Baldur the Brave mini-series).

Now I’ve got all the Thor volumes on my shelves, and all those carefully collected comics are in plastic bags in the basement. Sometimes, you just need to be patient. 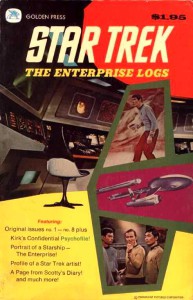 But sometimes, if you’re too patient, the moment has passed. When I was very young  Gold Key had a line of Star Trek comics. They weren’t very true to the characters or the show, for the most part, but I was a kid who loved Trek, and they were Star Trek, and so I wanted to read them. Anyway, one day when I was 7 or 8 I walked into a department store with my mom to discover a rack of 4-6 volumes of  these Star Trek comic books — not just comic books, but COLLECTIONS of 8 issues. The first “graphic novels” I ever saw.

I begged Mom to buy them for me, but while we weren’t exactly poor, we weren’t exactly rolling in extra cash, so she got me one of them. When we finally returned to that store (it was on the far north side of town) weeks later, the awesome display was gone — the other 3, or 5, collections had vanished into the ether, never to be hungrily devoured by young Howard.

For years I dreamed of those unplundered riches, wishing I’d found a way to obtain them. And then, at DragonCon five years ago I wandered into the dealer’s area and lo and behold someone had reprinted every single one of those Gold Key Star Trek collections. They had the same covers and everything. Not only that, they were showcased  in a stand-up display that looked nearly identical to that one from my childhood. There they ALL were, even ones I’d never seen before (I found out later that another company had reprinted the entire Gold Key run).

I stopped, stared, smiled sadly, and walked past.

By then I’d realized I didn’t even really LIKE the Gold Key Star Trek’s very much, because they weren’t really Star Trek. The characters in them didn’t act very much like the characters I loved, the stories were simple, and the equipment didn’t even look right (turns out that the original artists hadn’t had anything to work from but publicity shots, but later issues do look more like the show).

As I walked away I couldn’t help thinking that if I’d somehow been able to purchase them and pass them through a window in time to my younger self, I’d have made me very happy. Older me just felt, well, old and a little sad.