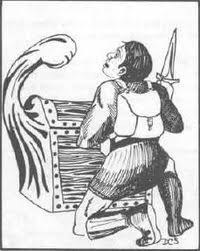 Every year  RPGnow/Drivethrurpg.com has a Christmas in July sale. It’s not under way yet — usually it takes place around the end of the month. Almost every year I get a wish list together, save up some PayPal cash through some trades, and get ready to splurge.

I love reading this stuff even if I never use it in a game — even if I’m NOT gaming — because the best of it throws off sparks and sets fire to the ‘ol imagination.

This year I thought I’d do a series of articles before the sale begins and point you towards some fantastic products I’ve accumulated, in the hope that you’d get some joy out of them yourselves. I’m such a long time gamer that there are quite a lot of them, so today I’m going to focus solely on treasure and loot.

As you’d probably guess, almost all of this material is from small vendors you’ve never heard of.

I’m only going to discuss my very favorites. If you have others you think ought to be mentioned, I hope that you’ll do so. 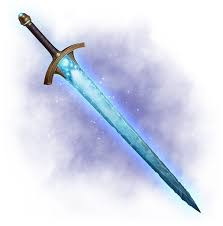 When it comes to treasure I completely agree with a statement Bruce Lynch made in a review over at his Ten Foot Pole site. He had this to say about a sword that can be recovered in the module ASE 2-3, arguing why the module’s author was clever for creating a named weapon: “Why would anyone ever put in a ‘+1 sword’ when you could put in ‘Aidru, Slayer of Men. Continually slowly drips blood because of all the people it’s killed.’ THEN you can give it a power. Even ‘+1’. I’ll take the Sword of Unlife and Aidru, Slayer of Men over a hundred +1 swords. Players get attached to unusual and unique magic items, be it their powers or their descriptions. They have their characters hang on to them long after they are useful. That’s the kind of thing you want to have happen in your RPG.”

Right on, Bruce. He’s one of my very favorite reviewers for reasons I’ll discuss in later posts, and I fully agree with him there. Treasures should be cooool and memorable. I love handing memorable objects out to players, or just reading about them and thinking about what things like them could do in a story.

The Mother of All Treasure Tables. So you’re designing an adventure, or some old ruins, and you need some really nifty stuff lying around that’s not magic? THIS is the place to turn if you’re wanting great description. The contents are arranged by size and value, to more easily fit your needs. And the material is so interesting your players may not even want to sell it, but add it to their holdings. Check this out, from page 134, part of a horde with 30,000 gold pieces. Maybe it’s one of the mundane things in a wizard’s tower: “Next to the clock sits the spyglass on its tripod. The legs of the tripod are made of polished cherry wood and capped with brass, and each is covered in stylized carvings of stars. The body of the spyglass is made of solid silver, and its surface is delicately etched with different constellations. The stars which comprise each constellation are picked out with inlaid gold, and three of the brightest stars are marked by pieces of golden topaz.” The book is jammed with stuff like this — that’s ALL the book contains, apart from a little front matter. I liked it so much I bought it in hardcopy. 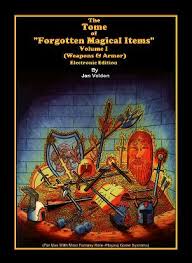 The Tome of Forgotten Magical Items comes in two volumes, (aptly named Volume I and Volume II) and I recommend them both. These books are a lot more basic in their presentation than some others on my favorite list, and they aren’t crammed full of named stuff like Aidru, Slayer of Men, but they do have tons of neat effects and ideas I’ve never seen in any other treasure manuals. I just randomly flipped to a page and found the Arrow of the Roc, which, when shot, magically transforms into a giant bird that the user can command to attack his enemies for ten rounds. If it survives, it flies peacefully away. See, weird and mythic. I love these books…

I Loot the Body is one of many great Raging Swan Press supplements. This book features tables with loads of intriguing, disgusting, or story-hooking kind of things your intrepid adventurers can find on the clerics, rogues, warriors, and wizards they fell, not to mention stuff within their bags of holding. There’s even some tables for random things you can find on minions. This thing is GREAT. My players still talk about the weird stuff they discovered on a bag of holding years ago, all generated from a table in this book, like the mounted badger skeleton, its mouth containing an animate scroll. They never found the courage to read it aloud to see what would happen…

Weird treasures you find from looting get more mention in Raging Swan Press books GM’s Miscellany: 20 Things Volume 1, Volume 2, and Volume 3. That’s not the primary function of these books, and I’ll discuss them more in later write-ups, but 1 for instance has a number of nifty charts, like 10 things you can find in a gelatinous cube and 20 things to loot from a dead kobold, while Volume 2 has almost 20 pages given over to charts like 10 remarkable long swords, or 20 things to loot from a dead cultist, or 10 things to find in a giant’s sack (and more). It’s all entertaining and adds to story development.

All That Glimmers is another Raging Swan Supplement, and an excellent one, featuring loot both mundane and magical, divided by monetary value and appropriate character level. That’s Pathfinder level, but I find even if you’re not using Pathfinder it’s still great. It’s divided into sections on hoards, armour (this being a British publication), weapons, miscellaneous treasures like coins and books and art objects, spell books, treasure maps, and intelligent magic items. A lot of the sections have some great suggested hooks & complications. 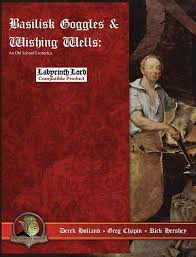 Basilisk Goggles and Wishing Wells has some wonderfully evocative, clever treasures I haven’t seen in other places. A few are for more modern or even science fiction settings, but the majority are fantasy fare. The contents aren’t quite gonzo, they’re just fun, like magic torches, or magic pigments, or new Ioun stones. Things I’ve just never thought of.

The folks at Tabletop Adventures always do great work, and when it comes to treasure books they’ve got some really neat ones. I can highly recommend the following: Bits of Magica: Pocket Items, Bits of Magica: Rings & Jewels, and Bits of Magica: Mystic Writings. Each one of these brings really inspired stuff to the game table — cool rings and jewelry with small but intriguing effects, tomes, scrolls, and other great stuff you can find lying around, and strange, compelling or downright creepy pocket items you might want your characters to get hold. Take note — you can get all three as a bundle at a reduced cost. Something a lot of online publishers at RPGNow/Drivethrurpg.com do, so keep your eye sharp!

I’m a huge fan of The Figurines of Wondrous Power, and I’ve seen a lot of expansions and add-ons to them over the years. My favorite is titled E.N. Treasure Troves: Figurines of Wondrous Power, and has lots of swell extra animals, like the blue baboon, or the diamond eagle. It’s intended for 3.5 D&D games, but most flavors of D&D and its offshoots have interchangeable mechanics. I just ignore the majority of the stat blocks myself and apply the great ideas.

Lastly, you can’t miss the ludicrously inexpensive Wondrous Wand Effect Generator. I love the idea of a Wand of Wonder, but the one in the original DM’s guide wasn’t nearly interesting enough, and was a little too deadly to the user. This one is AWESOME and far more entertaining. Every time the player in my adventures who carried this thing pulled it out the other players cringed, knowing something totally awesome or totally useless but completely entertaining would take place. Oddly enough, no one had reviewed the product until I swung past this morning to do so. Help me spread the word on it. I really ought to see if other products from the same creator have the same punch.