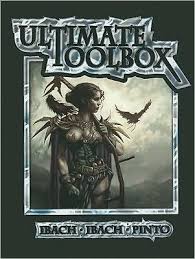 As I mentioned last week, RPGNow has a Christmas in July sale coming up soon, so I’m taking a look at my favorite tabletop gaming resources. I’ve accumulated a lot of them over the years, so I’ve divided a discussion of the tools across multiple articles. I last looked at treasure. This time, I’m looking at third-party game products that are full of creative lists and descriptions, advice about campaign and adventure design, and adventure seeds.

It may be that there are some excellent ones out there that I haven’t read — if so, let me know. Here, though, are the ones I most use.

Ultimate Toolbox is an expanded reimagining of the earlier Toolbox, both from Alderac. Ultimate Toolbox lacks the 3.0/3.5 statblocks of its predecessor, and it ports over almost (but not quite all) the rest of the material from the original book. But then it adds scads more simply great stuff. You want to design your campaign world, or generate some tavern drinks, or toss some riddles into your campaign or name some dwarfs or, danged near anything else you can think of, this is a must have, both during adventure prep and while you’re running the game. I’d never part with this book.

Another keeper is Frog God Games’ Tome of Adventure Design, with some of the most involved villain generation and motivation tables I’ve ever seen, not to mention some excellent plot assistance tables. The result is just grand. It can also assist greatly with the design of dungeons and is chock full of excellent features and details that bring your dungeon adventure to life. 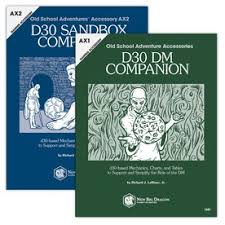 Richard LeBlanc Jr., the genius behind New Big Dragon games, has three essential books: the D30 Sandbox Companion, which has more wonderful tools for putting your campaign together, especially if you’re wanting to design it in a more sandbox way, the D30 DM Companion, which has all kinds of great supplemental material and details for keeping your adventure running, and an alternate monster manual titled the Creature Compendium that’s become a mainstay of my adventure gaming because it has interesting and original critters that just beg to be dropped into your game. I always keep it handy. But wait, there’s more, because the New Big Dragon web site is chock full of great additional D30 tables – monsters, mythic sites, you name it. And LeBlanc has more stuff in the works, so I keep checking in. Here’s a link to his downloads page, but there’s lots of additional  great material that can be downloaded from his blog. 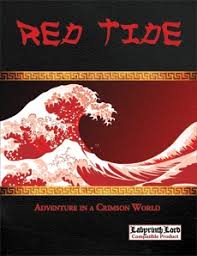 Another one stop place for genius material is with Kevin Crawford at Sine Nomine. I’ll provide more specifics about the excellence of his campaign materials in a later post, but I have to mention them because his incredible sandbox creation tools are all embedded in his campaign settings. You can expand upon the setting material Kevin has already created within his books, or simply use them to create your own with his astonishingly creative and useful charts and tables. And he has settings galore, from the fantastic Africa of Spears of the Dawn to the deep space of Stars Without Number (which you can download for free so you can see just how fantastic Crawford’s work is) to a fantasy setting with a twist, Red Tide, which is where you’d probably want to stop if you were after sandbox material for more traditional western or eastern settings. It’s pretty magnificent. An Echo Resounding is an expansion and companion volume with even more assistance for sandbox building. (And the fellow has even MORE settings and stuff even than this.)

Included in every one of Crawford’s books are simply fantastic instructions for setting up and populating sandbox campaigns. I wish this kind of material had been around when I was a young man first playing these games, because it’s the primer we all needed for campaign building and never had. I buy nearly everything Crawford puts out because it’s so useful, highly creative, and extremely well-written and produced.

If you’re looking for villains, either for an adventure, or to be the secret manipulator behind the entire campaign, Scions of Evil from Raging Swan Press has you covered. It’s jam-packed with interesting bad guys and minions and the plots they’re trying to hatch. Some of them even work in groups. It’s statted for Pathfinder, but the bad guys and their schemes can work to bolster any fantasy campaign. 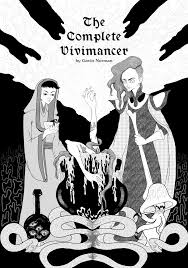 Speaking of awesome villains, here’s The Complete Vivimancer. You need a Vivimancer villain. Everyone needs a Vivimancer villain. You know those wacky hybrid monsters that turn up in adventures, and the awful experiments with living beings that are often background material in role playing games? Well, Gavin Norman came up with the character class that’s the mastermind behind all those terrible things – and other related horrible bits you probably haven’t thought of, complete with spells and features and more. I don’t know why everybody else isn’t using this book. I mean, I’ve been playing D&D since the freaking ‘70s and I’ve NEVER SEEN this character class. Although, honestly, it’s primarily inspired me to use it for villains.

If you’re interested in dungeon design, there are three great sources – the aforementioned Ultimate Toolbox and the Tome of Adventure Design, and Dungeon Dressing from Raging Swan Press. It doesn’t just help you generate neat stuff to find in dungeons, it helps you come up with backstories for the things or people you’re placing.

For fleshing out other places, you might want to check out the 100 Oddities series. I’ve read at least a half dozen oddities PDFs and the 100 creative things in every one of the series are fabulous ways to help bring a setting to life. I’ve spent the most time with the Wizard’s Tower and Wizard’s Library supplements and I used all the gear in to populate a wizard’s lair with quirky material I’d never have dreamed up myself and that really entertained my players.

Along that line, it’s about time I mention the 20 things series from Raging Swan Press once more, which are replete with great details on almost limitless fantasy subjects, everything from objects you can find in a wizard’s tower and library to strange things to find in a curio shop. These three books and the ongoing material that’s available for free on his web site that will likely fill a fourth are excellent for helping ready an adventure and for sprucing one up on the fly. (Here’s the link again: GM’s Miscellany: 20 Things Volume 1, Volume 2, and Volume 3.) 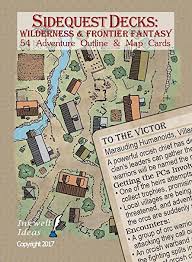 If you’re looking for quick adventure outlines, look no further than Sidequest decks from Inkwell Designs. These things rock. Each deck comes with outlines for 54 adventures. On one side of each card is an adventure outline with a hook, a thumbnail of the situation, the major flow of the adventure, and the villain. On the backside is an associated map. These card decks were one of my favorite finds at GenCon over the last few years, and I liked them so well I bought them again when they were re-released in a slightly re-organized fashion. The card decks are divided into categories like Dungeons, Caves, & Ruins, or Wilderness and Frontier Fantasy. Physical copies of the decks can be ordered here, or you can download them from RPGNow and print them yourself. Inkwell assumes that you’ll have the monsters and other information you need from whatever rulebooks you have lying about, and just focus on the material for a nifty story.

Urban Dressing 1 and Urban Dressing 2 are more fine entries from Raging Swan Press. These two books are wonderful for helping whip up a village or town and everything included within them, no matter if you’re want a cool temple, or statue, or market stall or tavern, graveyard or even a sage. They’re also great for keeping on hand in case you need to improvise something within the urban environment during the game. Book 2 goes into greater detail for specific kinds of settlements, be they logging towns, dwarven fortresses, war torn villages, or other places.

Lastly, I want to give an honorable mention to a product line that looks really cool and useful. I just can’t vouch for them personally because I haven’t read them. Look into the Castle Oldskull material and see what you think. There are products dedicated to dungeon design, world design, NPCs, and much more.

Other articles in my “best of” tabletop gaming GM resources articles include 1. Tableside Resources, 2. Treasure, and 3. Campaigns, Hexcrawls, and Adventures.