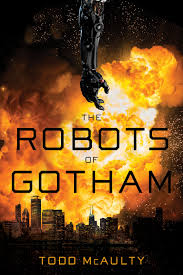 A few years ago I became a beta reader on a really swell manuscript that’s just now been released in hardcover. It’s already garnering some strong reviews, and I’m not surprised. It was strong in rough draft and it was even stronger as I read additional changes. Robots of Gotham is just a great read, and I was honored to blurb it.

Yeah, it’s not sword-and-sorcery, and it’s not historical fiction, but remember that I DO love me some space opera… but it’s not that, either. It’s science fiction in the near future, which doesn’t at all sound like my cup of tea. EXCEPT that it’s full of adventure, and suspense, and great action bits, and a hero who rises to the occasion, and dangerous and capable and well-motivated villains, and mystery. I mean, I could hardly stop reading it even in its rough state, and I never dreamed it was as looong as the thing is because it absorbed me so deeply. The thing’s huge, and not really my genre — and I COULDN’T PUT IT DOWN. I think that says a lot. It was so engaging I blew off my own writing time and just kept reading. Only a handful of modern writers can pull that off.

The book’s by the somewhat unknown Todd McAulty, best remembered for some great work in the early days of Black Gate magazine. He hasn’t published much, if anything, since. I hope to lure him over to the site for an interview some time soon.

Anyway, two thumbs way, way up for me. Anyone who digs clever heroes and well motivated characters and lots of great suspense should sign on. Especially if you like robots. You can find it here, or better, at your local store, because it still does more good for the writer if you pick it up from a physical bookstore. The store will stock more copies if you buy from them, and the more copies ordered from the store, the longer it stays on the shelf, and the better chance it sells more copies. It’s not a perfect system…