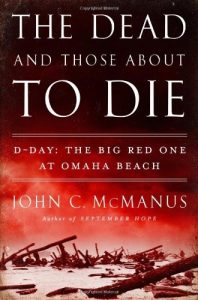 In honor of D-Day this year I picked up a copy of the John C. McManus account of the 1st Division’s assault on the eastern section of Omaha Beach, The Dead and Those About to Die.

It’s an intense and gripping book, filled with detailed accounts of the harrowing obstacles and events, and tragedy and heroism. Just a great read, and full of examples of true leadership.

I had no idea that the men were so overloaded with equipment that it slowed them down. Time and again survivors reported that they had been weighed down with too much equipment, and felt that they wouldn’t have lost as many men if they could have moved faster. So many things went wrong — the aerial bombardment against German positions wasn’t very effective, the water was so choppy the special amphibious tanks sank, most of the boats were swept off course and into the worst possible places…

And yet somehow the men got off the beaches and took out the fortifications. In case you couldn’t already tell, this book has two thumbs up from yours truly. Highly recommended.