Over the last few months I’ve said that the books of the talented writer Wade Miller are must reads, and I thought I’d finally tell you why.

Bob Wade and Bill Miller wrote in tandem as a combination of their last two names, or as Dale Wilmer, or as Whit Masterson, up until Bill Miller’s untimely death at age 41 in 1961.The two created wonderful, twisting, unpredictable, satisfying noir. And they pulled the neat trick of delivering consistently excellent work story after story.

It was Chris Hocking who introduced me to them, sending me a copy of Devil May Care and the first private eye Max Thursday novel, Guilty Bystander. I could tell right away that he’d given me something amazing. As I dig deeper and deeper into their catalog, Wade and Miller continue to surprise me, which is hard to do to a jaded author constantly thinking about plot as he reads, and even harder to do to that author when he, I mean, I, am reading work from the same creators. Usually writers have favorite themes and some use the same plots and archetypes over and over (and over and over, in some cases). Sure, Wade and Miller have some aspects that recur, but they don’t like pulling the same trick twice.

If they’re known at all it’s for their excellent Max Thursday private eye series, only six short books in length. I’ve enjoyed them so much that I’ve only read three so far. I don’t want to get to the end of the series too quickly, you see. The only other author whose work I’ve deliberately paced myself through to savor like that is Raymond Chandler, which is high praise.

It’s not just their series work that’s worth tracking down, though. I have yet to find a book by them I didn’t enjoy. Even if their first, Deadly Weapon, had a few rough edges, it was still very fine. By their second they seemed to have mastered everything that they needed because I couldn’t tell it wasn’t written by a seasoned veteran. 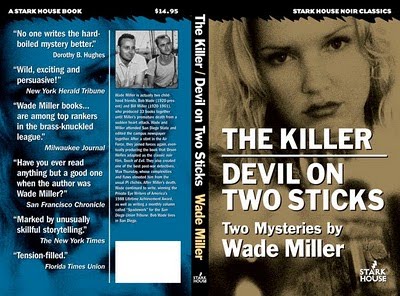 Wade and Miller have been reprinted over the years in several editions, though the work is so very good that I’m kind of shocked no one’s re-issued the books as a complete collection of some kind. As short as the old paperbacks are it would be easy to fit four or five per hardback.

You can get all the Max Thursday books on Kindle now, but be careful that you don’t read too much about their plots if you look into write-ups about them, because a lot of people give away the endings! And unlike a lot of mystery/adventure novels, these really do have endings you don’t see coming. If you seek them out in their original editions it doesn’t look like you’ll be getting much. The covers are lurid and the phrases meant to entice readers from the ’40s and ’50s are blunt, coarse and often ridiculous. Devil May Care is one of their very best books, but you’d never guess its excellence from the text on the front of the old Gold Medal book: “You could trust him with your life but never with your woman.” The back cover text reads: “He was doing all right, until he met a hungry blonde in a bar in Mexico. She was hungry for his money, hungry for him, and even hungrier for his gun.” Nothing there suggests the subtle depths, the character arcs, the reversals and surprises and a whole host of wonderful little touches that are going to have me reading it again later this year.

So what more will you find in these old paperbacks? Adventure with a capital A, complex characters, twisting plots. If you’ve loved the Stark books featuring Parker or the Fargo and Sundance novels by Ben Haas I’ve talked about in previous entries, you will love these.

Are there caveats? You’ll see the assumption of racism or sexism in the parts of some characters, but rarely or almost never in the voices of the authors themselves. There are, of course, some dated features now and then, but as with any older work it’s something you have to accept on its own terms. And, honestly, there’s a lot less of it than I expected to see. I just finished off the third Max Thursday novel, and the principal female character was incredibly modern, capable, clever, and independent.

Here’s a link to an excellent page that discusses Wade Miller in depth and mostly spoiler-free. It likewise links to many of their books that are now available on Kindle (though not all of them), as well as offering a list of all (well, most) of the books written by the two authors. I like the work of Wade and Miller so well at this point that I’ve tracked down nearly everything and have read a vast swathe of it. I’m now scratching my head wondering how I’ll lay hands on their short stories…