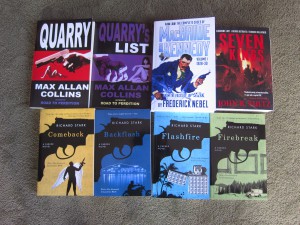 Between the gift exchange with my in-laws and another with some old friends, I ended up with a grab-bag of books I’ve been wanting to read. You can see them pictured to the left.

Along the bottom row are the last four Parker novels in the matched set now available through the University of Chicago Press. There are actually three more novels about the master thief, but they aren’t yet in print through U. of Chicago. As I’ve mentioned before, I’ve read all these Parker books, but I enjoyed them so much I actually wanted a matched set, something I don’t usually bother with. My older set is getting sent off to some writer friends who I’m sure will find them as inspiring as I have.

Along the top row are the first two books in the Quarry series, which I’ve been told has some similarities to the Parker novels of Richard Stark, and volume 1 of Frederick Nebel’s most acclaimed noir detective series. Those three books are all speculating, so to speak. I don’t know if I’ll like them or not, but I’m going to dig in and see what I think.

The last book there is by my friend John Fultz, and I’m looking forward to reading it very much. Oddly, it’s the only speculative fiction book that made my wish list this holiday season. I’ve been on a real noir kick as of late. If you’ve already read and enjoyed some Fultz, you should know that the third of the three novels in his series just came out in hardback this Christmas.

There is ONE more book I got as a gift. You know that creepy story by Dr. Seuss about the pale green pants with nobody inside them? It used to scare the bejeezus out of me. It was located at the back of a Seuss anthology, one that included The Sneeches and a bunch of other cool stuff that young Howard liked. If I wasn’t careful, though, while reading those stories that I DID like, I’d flip the pages too far and see those creepy green pants. Well, my old friend Brad Kicklighter saw that someone had published a new, glow-in-the-dark version of that story and couldn’t resist picking up a copy for me. 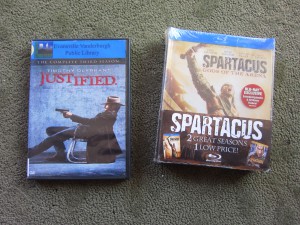 I still hate those creepy green pants. The odd thing is that they never bothered either of my kids, to whom my wife read that story before I could warn her about how scary it was.

We don’t watch a lot of traumatic television around here. My wife has a job that introduces her to enough emotional trauma. As a result, we’ve never tuned in to Breaking Bad, and I only ever watched Justified when I was laid up after my knee surgery. Well, over the weekend I treated myself to the library copy of the third season of Justified, having to watch it all on my lonesome. What fine, fine writing and acting. My brother-in-law and his wife also loaned me their copy of Spartacus, which I’ll probably have to watch solo as well, unfortunately.