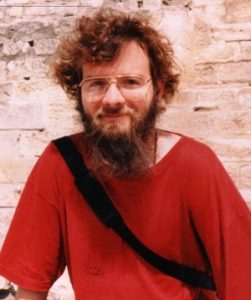 As I mentioned in my last post, I had begun suspecting that Black Gate’s well-reviewed and entirely absent Canadian (absent apart from a photo with a truly phenomenal beard) Todd McAulty was someone else writing under a pseudonym. There were a lot of familiar elements in his prose, so I deduced it had to be some modern author I was reading in other venues. Todd’s writing had the same energy and love of adventure as that talented bunch from Black Gate — but I couldn’t figure out WHY any of them would use a pseudonym.

I reluctantly checked in with John O’Neill but he, being Canadian himself, refused to acknowledge anything odd about the situation at all, and then got off the phone, claiming that he had left the stove on and had a dental appointment.

I had one more slim lead. Black Gate had published several author photos of McAulty, and I noticed that all were credited to the same person: Alice Dechene. I knew Alice – she’d written several fine reviews for us, including one which Neil Gaiman had proudly blurbed on the back of Stardust. She was also married to John. 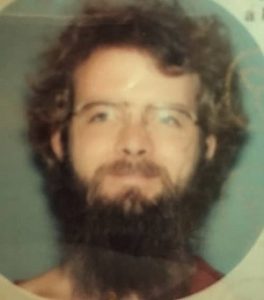 But when I asked if she’d shed any light on the situation, she abruptly stopped returning my emails. Except for a small file she sent a few days later, containing several unpublished photos of McAulty, looking more hairy than ever. Man, that guy knew how to rock a beard.

My suspicions were fully engaged. Now here’s where I had a stroke of luck. A few years back I did some freelance writing for some folks in the publishing industry on a tight deadline and they gave me an unusual thank you gift — 10-year old control codes to a venerable supercomputer.

“This thing was programmed to analyze writing patterns a decade ago,” they told me. “You didn’t hear it from us, but some writers use it to replicate the style of best-selling authors.”

I didn’t have any interest in making my writing sound like Stephen King. But I wondered if that old machine could be used to compare Todd McAulty’s writing to other folks in the industry. To answer that question, I turned to one of the most knowledgeable industry insiders I knew — John C. Hocking, who’s an ace investigator when he’s not writing ace sword-and-sorcery.

“Piece of cake,” Hocking said. “Five hundred lines of COBOL code. I could do it this weekend, if you want.”

I did want. I shared the control codes with Hocking, and a week later he called, saying that he had some news that might shake me to the core.

It was raining when I met him in front of a dive bar. He had his trench coat collar up and his hat brim down, and his gaze was haunted. He ordered a double and then just stared into the distance.

I asked if there’d been any report.

“There was no report,” he said. “The computer just spat out five words.”

Slowly, ever so slowly, he faced me. His tone was somber. “Todd McAulty is John O’Neill.”

There it was. Once I heard from Hocking all the pieces fell into place.

It had been right in front of me the entire time. That was why Todd’s prose seemed so familiar. His work sounded just like John’s editorials and articles at Black Gate, which I’d been editing for years.

How could I have not spotted it sooner? Especially since I had spent many hours with older, bearded O’Neill, who bears a striking resemblance to the alleged photo of “Todd McAulty.” 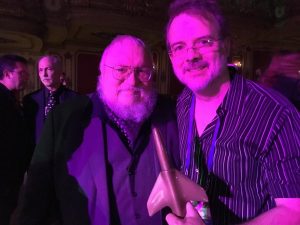 In fact, when I started comparing McAulty’s author photos, and the new ones Alice had secretly sent me, to John’s public photos – of him accepting his World Fantasy Award, and his Alfie Award from George R.R. Martin – I wondered how I hadn’t spotted it sooner.

I Skyped John the next day and confronted him. I expected angry denials, and I got them. But I calmly laid it all out, and in the end the evidence was just too overwhelming.

“I suppose death threats are useless against you,” John said.

“They’ve never worked before,” I reminded him.

He covered his face in his hands. “It’s all true,” he admitted.

Now we came to the burning question. “WHY?” I said. “Why all the secrecy?”

“I just…. I just got carried away,” he said. “I started by publishing a few stories in Black Gate. But then Todd started getting fan letters, and became one of the most popular writers we had. Rich Horton used his Locus column to announce ‘Todd McAulty is Black Gate‘s great discovery,’ and pretty soon there was all this demand for new stories. It felt like a cheat to stop then.”

“You could have come out any time you wanted,” I told him.

“Yeah, you’re right. But it was fun to have a secret identity, you know? And once Todd started carrying on an affair with Alice, I was afraid of what would happen if she found out we were the same person. She’d kill me if she knew.”

“Something tells me she’ll be just fine. I’m pretty sure she’s figured it out.”

I thought it best not to touch that. “What are you going to do now?” I asked. 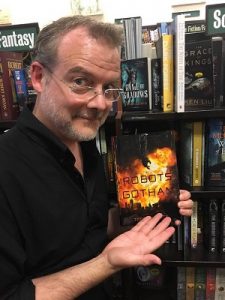 “Well, when I hang up, I’m going to go have a conversation with Alice. And next week I’m part of the Writer’s Symposium at Gen Con. I guess that’s as good a time as any to come clean about McAulty, and share the lessons I’ve learned being both an editor and a writer in this industry. Aren’t you going to be there as well?”

“I am,” I said. “And that sounds like a great idea. I’ll be there to support you if you need it.”

We hung up. All in all, the call went better than I’d expected. Gen Con is a warm and welcoming community, and the Writer’s Symposium is a fantastic resource for anyone who cares about the art of fiction and modern writing. It will be a great place for John and Todd to publicly come out as the same person.

As for me…. this was a diverting exercise, but it’s left me exhausted and just the tiniest bit paranoid. I find myself lying awake at night, staring at the ceiling, thinking things like, “Wait a minute…. has anyone ever seen Joseph Goodman and John C. Hocking in the same room?”

Don’t start asking questions you don’t want the answer to.