The Mystery of Todd McAulty, Part 1 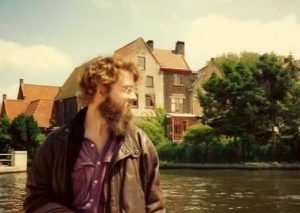 Todd McAulty (apparently in Venice, or something)

If you’re a regular to my blog, you’ve probably seen me talking about my early days in the industry, and how John O’Neill invited me aboard the Black Gate staff after my work for Flashing Swords magazine. I quickly grew to know the rest of the staff, and many of the regular writers. Over the years I’ve met an awful lot of the magazine’s mainstays, especially those with whom I maintained regular correspondence — apart from one reclusive, hirsute Canadian: Todd McAulty.

I first noticed his name attached to several popular stories in the early issues of Black Gate, and he was a noted reviewer — his long review of Lords of Swords in Black Gate 8 was the first to draw real attention to that worthy book, the first I was ever anthologized within. Following on that review we struck up a lively email correspondence, which carried on for years.

Yet Todd never appeared in person at any conventions, and when I turned up twice in Canada, he was notably absent. I began to suspect something strange was afoot, especially after I noticed a couple of stylistic details in the writing he’d been submitting to Black Gate. More on that in a minute. 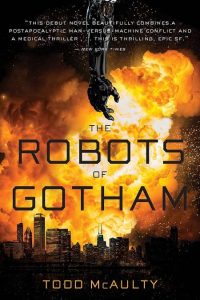 Fast forward a decade. In 2017 Todd asked me to provide a blurb for his debut novel, The Robots of Gotham. The book, about a group of Chicagoans fighting machine subjugation in 2083, was just as much fun as the stories I’d bought from him years ago for Black Gate, and I was happy to contribute a blurb. The book came out last June and was a huge success. Amazon and The Toronto Star selected it as one of the best books of the year, and there were rumors that Warner Bros. and Netflix were interested.

But that nagging feeling that Todd’s prose sounded familiar didn’t go away. I called John in Chicago’s Black Gate office to ask if he’d noticed anything odd about it, but he said he didn’t.

Last month, while James Enge was on a research trip to the copyright archives in the Library of Congress, I asked him to do me a favor: investigate who held the copyright for Todd McAulty’s works.

“I’ve stumbled on something strange,” James reported when he got back.

I asked him what he meant, because I figured the answer would be fairly straightforward.

His voice was a hushed whisper. “McAulty’s literary copyrights are held by a series of Canadian shell companies. I tracked the ownership of each, and as far as I could figure out, they’re all owned by a single trust company in Chicago. The trail ends there.”

Naturally I was surprised that Canada even HAD shell companies. Stymied, I knew it was time to dig even deeper, and call in another favor to learn the truth. I’ll have the result of my further shocking investigations in my next post.