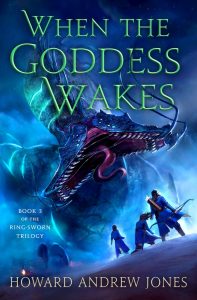 As I am sure is the case with many of you, this has been a long and painful few months. In addition to the outside challenges we’ve all faced, there have been some more private difficulties here.

Still, I’ve kept moving forward. I’ve been too busy revising to bother updating the web site, so I thought I should pass on the word that I’m doing a final read aloud of When the Goddess Wakes before I send it off to my beta readers, and then I’ll address their suggestions and ship it off to my editor at St. Martin’s.

I have found it’s generally a good idea to read my prose out loud as I begin to finalize it. That generally exposes awkward sentences as well as repeat words (or word echo, as I often call it). But it also reveals awkward and imprecise phrasing, and lets me know if too many characters sound alike. And, given that so many people take in their fiction as audio books these days, I try to write so that the text *sounds* well. I use a little more attribution than I once did, so that it’s always clear who’s speaking even if that’s not obvious via formatting on the  page.

In other news, the fifth issue of the magazine I edit, Tales From the Magician’s Skull, will be heading to the printer soon, and I’m at work on issue 6. I stole time nearly every morning over the last few months to start work on the outlines of numerous new writing projects, including new series proposals and short stories, and I look forward to finalizing their plans and starting work.

First, though, I need to finish this careful read aloud. If all continues to go as smoothly, it should be in the hands of beta readers (or on their screens, in front of their eyeballs) no later than by the end of next week. This pleases me.