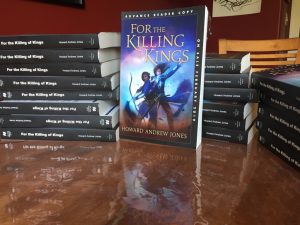 As the book promotion gets fully under way more and more blurbs are coming in, along with the first major review. Publisher’s Weekly just awarded For the Killing of Kings one of it’s highly desirable stars! This is great news and I hope it’s a sign of good things to come.

I had the opportunity to read from the book at the World Fantasy Convention in Baltimore last month and I was pleased by its reception. I had HOPED that Kyrkenall’s little one-liners were funny, and judging by the lively crowd, he came off pretty well.

World Fantasy Con itself was a blast. It had been most of a year since I’d hung out with my good friend John O’Neill, Black Gate mastermind, and eight long years since I’d been in the same place with the talented Bill Ward, frequent blog guest here.The first night I was invited to dinner with Arin Komins, Rich Warren, L.E. Modessit, John O’Neill, Doug Ellis and his wife Deborah, among others. Soon after, I met Tales From the Magician’s Skull alumnus Setsu Uzume, and made many new friends, like Lancelot Schaubert, Jennifer Brinn, Marie Bilodeau, and Clarence Young, who I joined for an expedition for Baltimore seafood only to discover a Trekker cut from the same cloth as myself. I got to reconnect with talented friends I only ever see at conventions, like Al Bogdan and Ilana C. Myer and Tom Doyle and Chris Cevasco and Patty Templeton and Claire Cooney, and finally met brilliant Claire’s brilliant husband Carlos Hernandez. I met up with Ilana and a number of her friends for a tasty dinner outside the convention then spent most of that meal nerding out about The Beatles with Michael Damian Thomas.

I attended numerous readings and a few panels and met S.A. Chatraborsky in person after her own spirited reading, which was a sneak peek of her second book. I praised her first novel and she gushed a little about Dabir and Asim and later I got to meet her family before they set out for an expedition to a nearby aquarium. Late one evening I sat down with Stephanie Beebe, Paul Matthis, Bill Ward, and others and brainstormed terrible story ideas. Either we were hilarious or it was very late at the convention.

I could go on and on, and I know I’m leaving some interesting tales out, but I’m afraid it already may sound just like name checking.

I’ve said it before and it bears repeating — the more of these conventions you attend, the easier it is to make connections even if you’re not mercenary about it. Just go there, experience the thing, introduce yourself to whomever you end up next to, and start talking without trying to make anything happen — just go for the company. Years ago I would have been jumping at the bit to be in speaking range of BAEN’s Jim Minz; now we can kick back and talk casually because we’ve met at various conventions.

Of course it’s always a delight when you’re rubbing shoulders with some of your literary heroes, and I was very happy to spend a little time talking with David Drake, and thrilled that he’d wanted me to bring along a copy of my second Dabir and Asim novel, The Bones of the Old Ones.