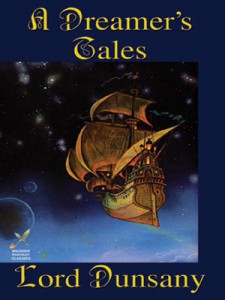 This Friday brings us the fourth installment of our read through of a Lord Dunsany short story collection, A Dreamer’s Tales. My friends Bill Ward and C.S.E. Cooney have joined me once again to share thoughts. You can join in too — this book’s stories not only are quite short, they’re freely available as a Kindle download or through Project Gutenberg. It won’t take very long to catch up if you haven’t read them yet, so you might want to do so before you read any further.

This week we tackled only two stories, “Carcassonne” and “In Zaccarath.” We have a pretty simple review scale. One star is a standout and two stars is truly great. 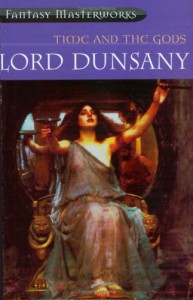 In some ways it may seem that Dunsany has shown us all the themes he’s capable of covering. He hasn’t, it’s just that if THIS is the first book of his you’ve read, you’ve run into some of the same things several times.

“In Zaccarath” gives us another city doomed to die, complete with splendid descriptions of the court in its full bloom and what little is left after time and tide has swept on. As Bill mentioned last week I’m comparing Lord Dunsany only against himself, but it’s hard for me to know how I would have felt about “In Zaccarath” if I’d read it before, say, “Bethmoora” or “The Madness of Andelsprutz.” I think I’d still prefer “Andelsprutz” over “Zaccarath,” followed by “Bethmoora.” Zaccarath is slightly different in that it feels that the focus is upon the folly of the king and his court rather than upon the city itself — so secure in their power that they ignore all the signs and portents that the end has come. That I like, as well as all the jeweled imagery and the length, which is dead-on. But I’m still not sure I’d give it a star.

I have mixed feelings about “Carcassonne” as well. I want to like it more than I do. There are so many fine phrases, like the description of the palace, or of the ageless and beautiful witch in her bath of endless waters. There are tremendously quotable lines, like “We must wrestle with Time for some seven decades, and he is a weak and puny antagonist for the first three bouts.” And then there are the spiders, who are to be surprised when the knights don’t return, leaving the hall for their webs. 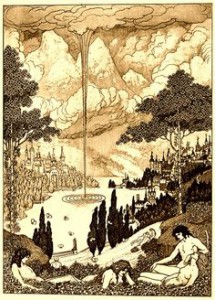 For these and for the marvelous scene of the dragon playing with a bear like a cat with a mouse and several other moments I feel like I should give it two stars, but then I compare it to my very favorites from earlier weeks and it seems too simple a theme stretched on too long for too obvious an end. And I think how much I wish to return and re-read the others I’ve given two stars — I know I’ll re-read “Idle Days on the Yann” whereas I’m not sure I’ll feel the need to go back to “Carcasonne again.” So, one star, despite all that beautiful imagery and wonderful phrasing.

How do you two feel about them?

Bill: Interesting you should mention themes, Howard, I was thinking the same sort of thing about repetition. I do think Time is one of Dunsany’s great themes, though, with all of his lost cities and tales of inevitable collapse and unavoidable fate. I gave both stories one star, I’ll be reading them again, but I felt both fell a bit short of their promise as well. 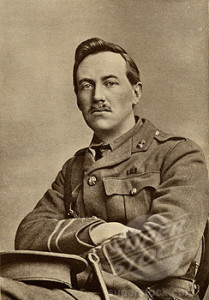 “In Zaccarath” * feels like more of a vignette, I think, or at least I was expecting something a little less abrupt for the ending. I love the picture Dunsany paints, a decadent court that can’t even comprehend its own end in the face of repeated warnings. A really fine bunch of Dunsanian names occur at the beginning and the image of a hall so large that clouds pass through it is fine fantasy stuff. The hugeness and scale of the place reinforces the remoteness of its rulers, who, from their lofty position, mishear prophecies of doom as promises of endurance, which I think is a great metaphor. I don’t rate this higher because I think it has the ingredients of a story that could have been a masterpiece, but seemed abrupt or incomplete to me. Or maybe I was just waiting for the doom to fall as part of the narrative.

“Carcassone” * is another about inevitability, fate, human powerlessness to confront the march of time. A vigorous troop of heroes led by a young King set out to take a city they are told they can never achieve, and spend the rest of their years at the task. And fail, in the end. Howard, you already pointed out many of the images that stuck with me as well, and this story really does have some jewels. I think the story almost invites an allegorical reading (a journey through the stages of life for example), but I don’t think that’s what Dunsany is doing, and I think the story would be weaker if he had.

So both stories feature human folly in the face of the inevitable, but that human folly is glorious all the same.

Thanks, Bill. Claire, what did you think? 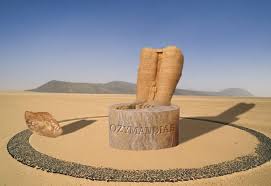 Claire: The first thing out of my mouth when I finished “In Zaccarath” was, “Oh, man! I LIKED it!” Which I’d not really been expecting to do, after diligently reading your comments. I love the quick whoosh of breath leaving the body, as the soap bubble that was everlasting Zaccarath… pops. It was like your eyes flashing open after a dream ends, and remembering, suddenly, that it was only a dream after all. It’s another Ozymandias story! Yeah, guys, I’m gonna have to give this one TWO STARS, in DEFIANCE of your one Bill, and your none, Howard, and say that it was a NUGGET of a short story (the golden kind, not the chicken kind), that looks all pretty and shiny, but is still, you know, a solid lump in the throat as you realize your own mortality!

Also, I want an emerald necklace. And an amethyst chandelier. Oh, and a diadem of diamonds like the heavens falling. I’m not saying you have to get them for me, Bill and Howard. I’m just saying that if you see a dreamy diamond peddler out there in the streets, send him my way.
“Carcassonne…” 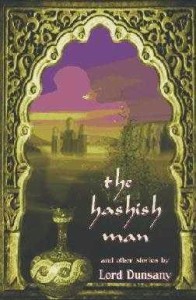 Let me just pause at the title before plunging into the first paragraph. The name evokes dead things already, doesn’t it? So. Let us see what unfolds. Ah. More chandeliers. Thank you, Dunsany. I like the way you hang words from your huge and high ceilings.I loved this: “Once Arleon, for the sake of a rhyme, had made war upon Estabonn…” I mean, what kind of rhyme was it? Did Estabonn have the rhyme for “orange” behind its fortress walls? Ahem: “And Arleon of the Harp did then lay siege upon the palace high, and play his wild harp for fifty dire midnights, until the owls sang his song and not their own, and the denizens of Estabonn did relinquish up the rhyme…”

I love this too; it kills me: “Far away it was, and far and far away.” I want that to be a line in a song I know as well as lullabies from childhood or most of Sondheim. I want to kip it and use it for my own. That line, it makes me want to PLAGIARIZE REMORSELESSLY! And then, then he brings up the WITCH, and I want to write her story, oh, yes I do. And still nothing has HAPPENED, precisely, Dunsany, but oh, you took me places, Dunsany. You took me places in my own brain, so even though I wasn’t sure about the one star rating, you’ve sort of already earned it, even though I have to slog through so many more pages of nothing precisely happening!!!

(Howard: nods and thinks that whole “nothing happening” issue, along with the sense that he was slogging to the end, is why he had trouble awarding this one a star. But he doesn’t interrupt Claire.) 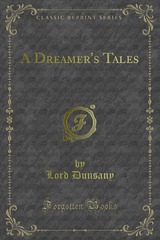 I liked the Beowulfy bit about waking up to find something terrible had eaten the sentry, and the bit with the dragon and the bear, and close on the heels of that, the whole paragraph about twilight. “It was the hour when meaning comes into senseless things.” OH, HELP! I want to LICK that line!

And then we come to the crux of the matter, I think, when the king smiled “as the aged smile, with little cause for mirth,” and tells his doughty harpist (whose fault, after all, this whole story is) that “It may well be that Fate has conquered us, and that our quest has failed.”

And yet–and yet–they do continue on. Which in a way means the exact opposite of despair. They pass out of the narrative, out of the story; they may never reach Carcassonne, but they sure as hell had a great time trying to get there. They had a lot of good hunting and feasting. They made their own legend. They listened to some really stirring harp music. They had a dream. And if they never made it, so what? They chased it.

And maybe it’s just the mood I’m in, but I call that a fine tale. A star at least, with another for the witch. So, two. Two stars for “Carcassonne.”

Howard: I feel like we were further apart this week than usual. Claire’s off to the World Fantasy Convention, or I’d ask her how she could give “In Zaccarath” two stars when she gave NONE to “The Sword and the Idol,” which not only had imagery, but had a plot and commentary about the nature of humans and their religions! And I’d ask both Bill and Claire if they really thought they’d read “Carcassonne” again because, despite the beauty I kept flipping to see how many pages were left. We’re saving a final week for a last look over what we’ve read, so perhaps we’ll each have our minds changed about a few things. Who knows?

Next week we have three very short ones to finish the book: “The Field,” “The Day of the Poll,” and “The Body.” Hope to see you here, and I look forward to your own reactions to this week’s stories.