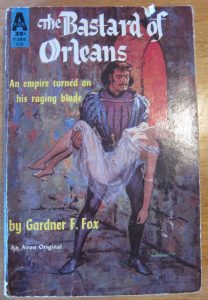 I finished Gardner Fox’s The Bastard of Orleans the other day. It sure started strong, and in the first 40-60 pages I thought I might be reading another one as strong as The Borgia Blade. It turns out that despite surface similarities (great action scenes and some old-style “spice”) that it was designed with different effects in mind.

As I contemplated this review I remembered to consider what I always wish other reviewers would do and thought about the novel on its own terms. I believe this book was intended to achieve a different effect than the one I enjoyed more. It was a historical intended to have great action scenes and titillating sex scenes, or scenes with sexy descriptions of women. Fox delivered these things very well, and if that’s what you went in looking for, you’d be very happy.

The Borgia Blade did both of those things as well, but with a little less emphasis on the whole “sexy scenes” department and more emphasis on plot and character (and led to a really thrilling conclusion). It felt as though almost a third to a half of The Bastard of Orleans was devoted to spicy stuff. This left less time for character development or more than a loose/basic plot structure, and the conclusion was a little perfunctory as a result. Characterization was a little basic, so that I never completely understood some of the character’s choices. Why, for instance, he was so in love with beautiful woman 1. rather than beautiful woman 2, of whom he was clearly quite fond and who was devoted to him almost from the first moment they met. Neither woman was written with enough character detail so that I could form an opinion of my own, apart from my disappointment that the protagonist didn’t reward loyalty and affection with loyalty and affection of his own.

Since I was looking to find another “Borgia Blade” I came away disappointed, but I can bet that if I’d read this when I was in my teens I would have been thrilled. Knowing now what I know about writers having to tailor for markets, I’m going to try some more Gardner Fox that was written for Gold Medal or Crest, the publisher of The Borgia Blade. I’ll report what I find here. I do love a good swashbuckler.