One Sword for Love 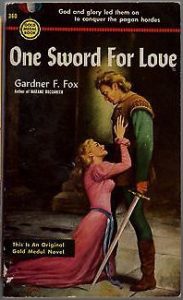 I finished another Gardner Fox historical earlier this week, and it was a cracking good one. Any of you who love a good Harold Lamb swashbuckler would have seen some familiar features, enough that I couldn’t help thinking that Fox must have read some Lamb. That’s fairly likely, actually, given that Lamb was one of the most popular writers in one of the two magazines best known for historical fiction (Adventure and Argosy — Lamb wrote primarily for Adventure).

As a matter of fact, the whole thing read rather like an R-rated version of a Harold Lamb Crusader story. So you get the gritty, tough, man-at-arms, but you also get some far racier moments that happen on-screen. That sword he’s holding, by the way… you don’t get much of that, because our protagonist’s preferred weapon is a spiked ball on the end of a chain with which he’s frighteningly proficient.

You’ll note that there’s a lovely blonde woman on the cover, and you don’t get much of THAT, either, because the romantic lead is a Persian Princess.

The novel starts with a bang and never really lets up. Pretty soon there are at least three competing factions (sometimes more) that are out to stop our two heroes, determined now to flee into the distant east. It’s a pretty grand adventure story. If I had any quibbles about it at all, it’s that I wished there were another two-thirds of the book. Yes, everything in the book gets resolved by the end, but I sure wish I knew what happened next!

The only  thing that kept me from loving it as opposed to liking it a lot was more a matter of personal preference. With its setting in the Crusader kingdoms, or Outremer, and its hero wielding a morning star, and even the inclusion of some Mongolian archers, it felt so very much like a Harold Lamb story that I thought I’d basically be getting one, just R rated. But John isn’t quite a Harold Lamb leading character. He’s brave and wily, but he’s not as clever, so that he’s constantly on the wrong foot and having to improvise. There’s nothing wrong with that, at all, but I mention it to demonstrate the faultiness of  bringing one’s own expectations to the book when reviewing it. (This swashbuckling adventure didn’t say ANYTHING about the plight of whales, or address gun rights, so I didn’t like it!)

This is a GOOD one, folks. Maybe not quite as good as The Borgia Blade, but it’s definitely worth picking up. And like all of these old books, it’s a quick read.