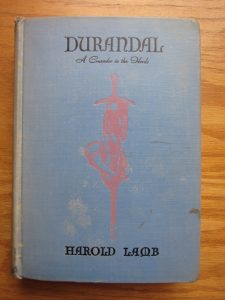 It was a late night last night, getting my revision ready for final turnover. Or, at least, hopefully final turnover. The morning that followed was delightful and promising but should remain mysterious for now.

So since I have nothing new to say, here’s one of Lamb’s very best stories, Durandal, as published by Doubleday back in 1931. That’s my personal copy. I very seldom see copies with dust jackets.

Durandal was originally published as three separate novellas, two of which were reprinted by Donald M. Grant Co. in the 1980s. They were planning to finally reprint the third, and I actually supplied them with its text, but nothing ever happened.

I intend to try, before the end of the month, a final time to get the complete collection printed by Bison Books/University of Nebraska Press. It’s criminal that this historical swashbuckler remains out of print. The problem is that Bison seems to have moved away from it’s historical prints. I’m going to give it my best shot, though. Keep your fingers crossed. And have a great weekend!