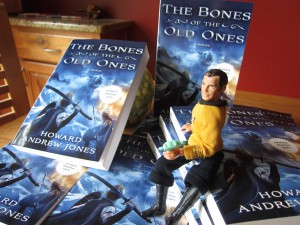 In the next few weeks I’ll be receiving my copies of The Bones of the Old Ones. It’s one thing to hold the advanced reader’s copy. It’s another completely to be holding the actual book with the final cover, the corrected text, the corrected cover copy with blurbs and a few reviews that came in immediately before the book went to press, and I’m looking forward to that.

I wish that the covers didn’t head off for printing quite so early, because it would have been nice to have the starred review from Publisher’s Weekly on the cover, but if I could make things come true by snapping my fingers I guess that would be a little further down the list than, say, world peace or honest politicians. 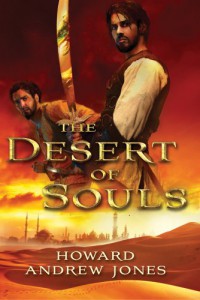 I was delighted to stumble across a glowing new review of The Desert of Souls earlier this week. You can find it here, over on a great looking site titled Podwits. The Desert of Souls got singled out as the starting entry in a new column about “great escapist literature.” I would pull out a few of the quotes talking about how awesome the book is, but, you know, I’m humble and all.

I’m super pleased that The Desert of Souls is still getting nice write-ups almost a year and a half after its initial printing. Here’s hoping the next one does as well!

In other news, I’m nearly at the two-thirds mark on the rough draft of the third Dabir and Asim novel, The Maiden’s Eye. It feels odd to be so far along with number three when number two is still five months from release, but it also feels pretty good. I don’t think there will be nearly as long a delay between the second and third book as there has been between the first and second.

Each book is a little different. Book three is a little longer and more intricate. I’ve often told writing students that there are many ways up the mountain, and that each project may require a slightly different route to the summit. And so I’m going to try something different this time because my gut tells me I should.

How To Write Magical Words

I’m a fan of books aimed at writers, and I’m always delighted to find another good one. 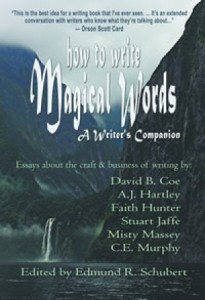 How to Write Magical Words: A Writer’s Companion debuted in January 2011. Unlike most “how to write” books that I’ve ever seen, Magical Words is presented in bite-size chunks. The authors take turns writing about various topics, presenting short essays with information, advice, and helpful anecdotes, then get out of the way for the next essay. None of which are more than four or five pages long. It’s an ideal approach for someone working in this busy modern world, or for someone under deadline, or with kids, or who wants to read a little something before sitting down to write for the day, and editor Edmund Schubert is to be commended for the structure.

The book is broadly divided into seven categories, like “Characters, Dialogue, & Point of View” or “Self-Editing,” into which each of the short essays is placed. Perhaps because the material originated on the web site magicalwords.net there’s an approachable, conversational quality to the advice — indeed, the contributing writers often react and expand upon the advice in the concluding remarks to each essay. As I read my way through the book I found myself looking more and more forward to seeing what the other writers would add, and what alternative perspective they might be able to offer. It was a lot like listening to a group of helpful professional writers as they trade tips among themselves — one has the sense that they are not so much talking at you as talking in a group in which you yourself would be welcome to drop in and ask for a few tips.

The rest of this essay can be found at the Black Gate web site.

Two more reviews came in over the last few days, both glowing.

Bruce Durham of Rogue Blades Entertainment said that The Desert of Souls “ is many things: dark mystery, hard-hitting fantasy, edge-of-seat suspense and swashbuckling adventure. It is written in a fast-paced, page-turning style replete with exotic, historic locales, vivid descriptions and memorable characters.” He went on to write that “It is this love of fantasy and exotic history, along with his grand sense of storytelling that has made Howard Andrew Jones a writer to be reckoned with for many years to come.”

Katherine Peterson over at Fresh Fiction said “Jones’s writing style makes one feel as if they’re listening to someone with incredible narrative talent telling a story as Asim and Dabir go from hurdle to hurdle, barely making it out alive from some. In Jones’s hands, the characters come to vivid life, including the evil wizard, and it’s easy to feel as if you’ve been transported back to early Baghdad as well. The dialogue, and especially the interplay between Asim & Dabir, rings true and speaks to a closeness only seen in strong teams like Sherlock Holmes and Watson. Jones incorporates forbidden romance and other intrigues in this tale and as with all good storytellers, slowly builds up the suspense. Once you get to a certain point, you’ll just have to finish this one as there’s no setting it down. I’ve heard rumors that there is a sequel to come, and I hope they’re true. For fans of sword and sorcery adventure, this is a don’t miss.”

And in completely unrelated news, my wife made some amazing carrot cake, which also pleased me.