Vance, Robert E. Howard, and the Role of Women 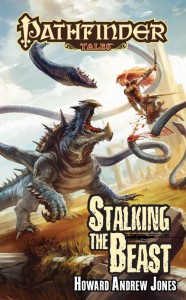 I’m  having trouble sleeping again, but this morning at least I’m putting it to use and am up early writing. I’ve got a lot of work to do on two projects I’m really excited about, so I’ll keep the entry short.

First, in my continuing effort to be everywhere on the Internet, I had a Q and A over on the Paizo boards about my upcoming novel, Stalking the Beast (which reminds me — I’ve got to create a “cover slide” for the new book so it can join the other four rotating at the top of my main page — hope I remember how!) You can find it here.

Second, on a long trip yesterday I started and finished Jack Vance’s Big Planet, courtesy of John O’Neill giving me one of his four extra copies (thanks, John!). I started to take Charles Saunders’ The Naama War — the fourth Imaro book — but was afraid it would get dinged up on the journey. 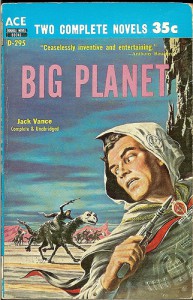 Big Planet was typical Vance and a great read, but it was also a product of its time. Lengthwise I can’t imagine it was much longer than 65 thousand words, which left barely any room for characterization. Vance can frequently be pretty light on characterization in some ways, although he will add details to even minor characters to bring a culture to life. But I don’t usually read Vance for his characters (unless said character is Cugel the Clever) I read him for the wild inventiveness about culture and events and amazing scenery, which he again, even in this early work, tosses off with careless ease that few others can even approach. Over the course of Big Planet the main characters travel through a vast landscape and encounter all manner of environments and societies, each different from the other and well described and fairly plausible even in their weirdness. And, as is almost always the case in his work, the pace never flagged. The man was a master and there’s still a lot to learn from him even while you’re enjoying his lighter fare.

Having been written in the early 1950s, it has some artifacts of its time that it can’t really be blamed for. It’s assumed and never, ever questioned, that adventuring and important duties are for men — sexual equality isn’t even on the radar. It makes me wonder how I’d ever share this book with, say, my daughter. Most authors can’t be expected to look beyond their time, and I’m sure in 50 years, assuming anyone’s still reading my books, someone will find something that I’m not doing that makes me dated. Still, in contemplation of this sexism I can’t help thinking about Robert E. Howard’s Valeria, from “Red Nails.”